On Screenwriters Getting Noticed: 4 Tips from Literary Manager Jeff Portnoy In Hollywood, original stories are rarer and rarer. It feels like most of the big blockbuster movies we see hitting theaters (when theaters existed) are based on pre-existing intellectual property. Sequels, adaptations, true stories, remakes, etc. dominate the biz because it’s easier to market a movie or TV show that already has some awareness, than to market something completely brand new (at least that’s the current thinking in most commercially-minded financiers, distributors and TV networks).

So, you may be asking yourself, how do I get that job?

The Tracking Board’s Launch Pad recently spoke with Bellevue Productions manager and producer Jeff Portnoy about how writers can go from outside-looking-in to being a working writer in Hollywood.

Screenwriting is a competitive industry. Thousands of scripts are written every year by people trying to gain any kind of toehold in the industry. How does a manager even begin to sort through that many scripts and find the writers ready to break in?

“There’s just too many writers out there, too many scripts for us to read.”

Portnoy says the industry depends on contests to find the very best scripts and new writers out there.

“The smartest thing to do [to get read] is put your screenplay into one of many competitions… These are institutions that managers, agents, and producers… have been using to vet material.”

Portnoy specifically mentioned competitions like the Launch Pad, the Nicholl Fellowship, the Austin Film Festival, Final Draft Big Break, and fellowships on the Black List. And, there are many more reputable competitions and coverage sites out there on websites like Coverfly.

“We depend on these competitions to whittle it down from tens of thousands to several hundred, sometimes down to ten.”

Featuring a jury of 25 industry professionals from top companies. The Launch Pad Pilot competition has led to dozens of writers staffed on hit shows for Netflix, CBS, NBC and more. 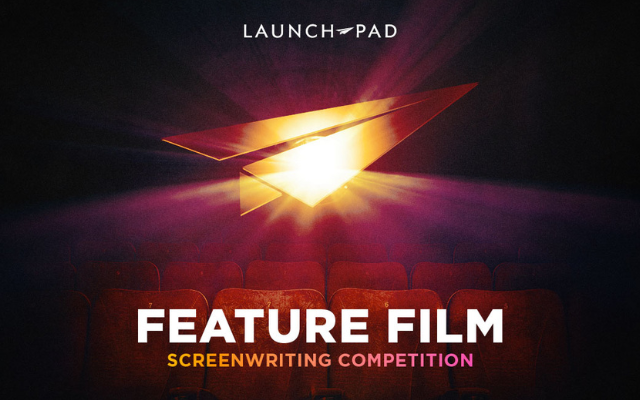 Be a part of the Launch Pad’s tradition of writer success, including projects sold to Netflix, Paramount, and more. Plus, special Mentorship Prize with an Oscar-winning screenwriter and the writer of THE TOMORROW WAR!

Placing in a contest is a surefire way to get your logline seen and to get your script read by industry professionals.

“When you’re in the early part of your career as a writer, one of the first obstacles is you just gotta get yourself on the map. Become well-known in the industry… Getting you on the map requires you to write something that’s very bold and loud. Something that appeals to the industry reader.”

Readers read so. many. scripts. I know readers. I’ve been a reader. When you’re reading hundreds of scripts, they can sometimes begin to blur together. What gets a reader excited is a script that feels fresh. Bold. Takes chances. Something that will shock them awake.

One strategy Portnoy has recommended is a “stunt script,” meaning a script that is probably unsellable, but one that grabs a reader’s attention and gets you noticed.

“Sometimes you’re writing something in the beginning of your career that’s hard to sell, maybe is unsellable, as the fastest way to getting paid.”

Portnoy cited writer Nicholas Curcio’s Black List script Barron: A Tale of Love, Loss & Legacy, a dark coming-of-age comedy about Donald Trump’s adolescent son that Curcio had no expectations to ever get made. But, that script got him attention in the industry.

Stunt scripts are just one strategy out of many, and it’s a big gamble. Starting a project you know will have no chance in the marketplace is risky, and Portnoy said Curcio knew the risk and was in a financial place to give that route a shot.

But, maybe you’d rather spend your time and energy writing a movie that might get made, in addition to getting you noticed. What kind of scripts down the town tend to go for?

“The industry likes dramatic writers. Dramatic voices. Prestige. They like things that are elevated. Smart. Stylistic. You’ve got a very high-end taste here in town. If you please those people, you’ll inevitably get your foot in the door.”

Showing readers you’re able to write strong characters, good simple stories, and genuine emotion is important, as those are the elements producers need injected into their franchise films.

“It’s not uncommon for a writer to write a very small, obscure, dramatic script that lands on the Blacklist, and then they get hired to write a super hero movie at one of the major studios.”

Part of writing for the industry is creating stories that are eye-catching. Stories with a good hook and a succinct but attention-grabbing premise.

“If the writer says, ‘Okay, what should I write,” I’ll say, ‘Well, let’s think of something that the logline is going to be so loud and so bold that an industry reader is going to single it out.”

Every writer has heard that period movies are hard to get made, but even period scripts can grab the industry’s attention if you write strategically.

“For writers that are interested in doing period, work on Abraham Lincoln, George Washington, Martin Luther King. People that are brands. It mitigates risk… There’s that built-in audience.”

“The industry readers and the executives and the producers and managers and agents tend to like a specialist… Masters of one trade and not jacks of all trades… You don’t want to get a reputation for rotating back and forth between very different genres.”

It’s tempting to want to want to cleanse your palette from writing one genre with dabbling in another, and while you’re starting out, that’s an absolutely necessary part of building your voice. But, once you become known for a genre, it’s important to build on your profile within that genre.

“Genre-wise, you want to stay in a lane that’s good for the writer. If they write thrillers, I think there’s room there for sci-fi thrillers. If you’re a science fiction writer, you could do sci-fi action, sci-fi horror. Every lane has some wiggle room.”

It’s all about building your brand as a writer. The industry loves a specialist so they know who to call when they need a fantasy writer, an action writer, a romcom writer. Be an expert in one thing.

“You just don’t want to get a reputation for rotating back and forth between tons of different genres. Then, you’ll get pegged as not being a specialist at something.”

But, as you continue to write and advance in the industry, there’s still room to grow the kinds of stories you tell.

“As your career blossoms and you’re successful you can expand the lane. And if you really have a lot of success, you can… pivot in a completely different direction.”

*Brian T. Arnold won the Tracking Board Launch Pad Feature Competition and was featured on the Hit List and the Young & Hungry List. Arnold also studied improv and sketch comedy at Upright Citizens Brigade and The Groundlings, wrote for a sketch team at iO West (R.I.P.), and wrote for the CBS Diversity Comedy Showcase. He’s repped by Verve and Romark Entertainment.